Nothing feels better than coming home on a chilly winter evening to warm your feet near the fireplace and sip hot cocoa with marshmallows.
Wouldn’t it be great to have a controlled fire in your house — in a wood-burning stove?
If that sounds like what you’re looking for, check out our list of the best wood stoves in Canada and go through a detailed buying guide that will answer all of your questions concerning this appliance.

The Englander stove is one of the oldest and, unsurprisingly, one of the best wood stoves available in Canada. This non-catalytic stove has an impressive heating range of about 2400 square feet, making it a suitable option for large room sizes.

Talking about the effectiveness of the Englander stove, this stove can output heat energy up to 75,000 BTUs while maintaining impressive efficiency in terms of fuel consumption, a particularly appreciated feature in the winter.

The design of this stove makes it one of the easiest to assemble. For example, the vent is standard-sized. In addition, fueling and maintenance are easy, thanks to the stove’s spacious door and ash pan. Finally, adding beauty to your space, especially with the fire view.

Testing the Englander showed me a heating range suitable for moderately large homes. I also commend the efficiency as regards fuel consumption. Ultimately, this stove can be gotten at a price that makes it one of the best-valued stoves in Canada.

Like the Englander wood stove mentioned above, this stove is also non-catalytic. However, it can only effectively heat a space of about 1800 square feet. Despite the lower space capacity, it is still one of the best stoves around, thanks to the quality in performance.

This stove is impressively efficient in fuel consumption, so you don't have to worry about frequent refueling. While natural vent stoves tend to lose some of the heat generated to the exhaust pipes, this stove's output is complimented with a blower, a feature absent in the Englander stove. The BTU generated by the stove exceeds 62,000 units.

As one of the best modern wood stoves, this stove is sturdy and aesthetically pleasing. The self cleaning system of this stove's glass is quite efficient, not only for the aesthetics but also for easy maintenance through periods of use. Finally, this stove is quite easy to set up and maintain especially with the lower cost of parts compared to direct vent stoves.

My tests showed the Pleasant Hearth stove to be quite sturdy. In addition, I liked the efficiency of the self-cleaning system, which effectively reduces the time spent cleaning the stove. You should consider the pleasant hearth if you are looking at a long-lasting stove for your room.

If you are more interested in the best wood stove for camping, this stove might just be what you want. In addition, the Winnerwell stove can double as the best small wood stove for cabins in Canada due to its considerably lighter weight compared to others.

This model is easy to carry (thanks to its lightweight design) and allows for effortless set-up, which means you can take it to your hikes or simply keep yourself warm when hanging out in your garden house.

Another cool thing about this wood stove is the material it’s made of. Using ultralight titanium, it doesn’t weigh that much and allows for improved portability. At the same time, titanium is very efficient when it comes to heat transfer. Therefore, this wood stove by Winnerwell can make you feel comfortably warm even if you find yourself in a very cool environment.

According to my tests, I discovered that this lightweight stove outputs sufficient heat energy to fill a small room or a tent. This is the kind of stove you may want if you enjoy camping or you like staying in the outhouse.

Another model that deserves to be among the best wood stoves in Canada is the Fltom camping stove, which can offer a bit more than just a compact design and increased portability. This model is super easy to assemble, which means you won’t have to waste your time when setting up camp. In addition, this stove is suitable for cooking while camping, thanks to it being one of the best low-clearance wood stoves available. This means you will be both warm and full when camping with the Fltom.

You might also appreciate the fact that this wood stove has sturdy legs and a stainless chimney pipe. It can be used even in unfavorable weather conditions to keep you warm and cozy. And because the Fltom has a high heat output, it can quickly reach hot temperatures and warm your tent in almost no time.

The Fltom stove is a stove with a dual purpose. My tests showed that the stove’s chimney makes it a viable option for cramped spaces as I could simply place the chimney extension in a safe place. Also, the stove’s low clearance made it easy for me to use it for cooking, making it a good option for campers and open gatherings. 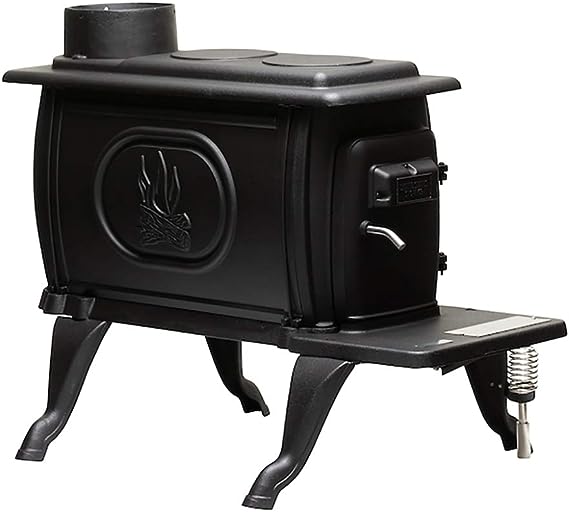 The US Stove US1269E is a great option for those looking for a heavy-duty stove. This stove is made with a cast iron body and a steel door; it is durable and long-lasting. It also has an EPA-certified catalytic converter, making it more efficient than other stoves on the market.

This cast iron stove is perfect for those looking to save on heating costs and comes with a fire-proof board that helps redirect smoke. Plus, it's easy to assemble - you'll be up and running in no time!

In general, if you are looking for an efficient and easy-to-use stove, the US Stove US1269E is a great option.

My tests revealed a fast-heating and fuel-efficient stove with a sturdy build. I also loved the large doors, which allowed me to fuel the stove with large logs of wood that efficiently burn for longer periods.

All the wood stoves in Canada are classified by the processes they use for burning wood. Those are catalytic and non-catalytic combustion. If you have no idea what that means — read on!

These use the catalytic combustion process and are equipped with a catalytic damper — a coated ceramic element that resembles a honeycomb. The exhaust passes through this honeycomb and the smoke particles and gasses ignite and burn, which allows for lower emission levels.

Note, though, that the catalytic element should be replaced every couple of years, and the stove will need more frequent, deep cleaning after every season. Plus, catalytic stoves are generally more expensive than non-catalytic models.

As the name implies, these stoves don’t have a catalytic combustor. However, they reduce emission levels by having a slightly different construction and features, such as:

Typically, these elements — a baffle, a firebox, and tubes — will also need regular replacement because they tend to deteriorate under the high heat.

It’s also worth noting that non-catalytic stoves are cheaper than those with a catalytic combustor and will work better for occasional use and for warmer climates.

But here’s the real deal:

Deciding on the type is really a matter of personal preference. If you want a modern and more technological model, go for a catalytic stove. For those who prefer a more traditional wood burner, a non-catalytic stove will make a good pick.

Choosing a top-rated wood stove in Canada isn’t that hard if you consider all the important factors in advance:

The best type of hardwood for burning is evergreen oak: it produces around 36.6 million BTUs per cord (4).

What temperature does a wood-burning stove reach?

An average burning range for wood stoves of decent quality is 150-315°C. But it doesn’t mean it can’t reach higher temperatures. In modern wood stoves, users can easily control the temperature by allowing more or less air in.

How far does a wood-burning stove have to be from the wall?

If your wood stove is certified by a Standards Council of Canada, the clearance requirements will be stated in the manual. In the case of uncertified stoves, the clearance is 900 to 1,200 mm from the wall, depending on the stove type (3). Note that this distance can be reduced by using different types of shields.

What to put under a wood stove?

Non-combustible materials, such as sheet metal, grouted ceramic tile, or mortared brick will make the best flooring under and around a wood-burning stove.

How much does a wood stove weigh?

An average wood stove weight ranges between 150 and 350 kg and can reach up to 500 kg, depending on the size and materials.

What size wood stove do I need?

A wood stove is an energy and cost-efficient alternative to central heating in cold regions. It can easily warm up the whole house and make a great focal point for cozy family gatherings during winter evenings.

If you are still unsure about the best wood stove for you, then the Englander wood stove is a sure bet. Its efficiency and capacity easily make it my favorite. Furthermore, it is quite easy to set up, thanks to the direct venting system it uses, and then there is the aesthetic value you get from adding this stove to your space.

Have you used wood burners before? What was your experience? Tell us below!