I bet most of us do. But how many times have you stopped yourself from ordering them because of that unhealthy oil they are cooked in?

Those days are over! You can enjoy your favorite French fries or nuggets or whatever you want, but a healthier option. Read my review of the best air fryers in Canada and see for yourself!

Our Reviews of the Best Air Fryers in Canada 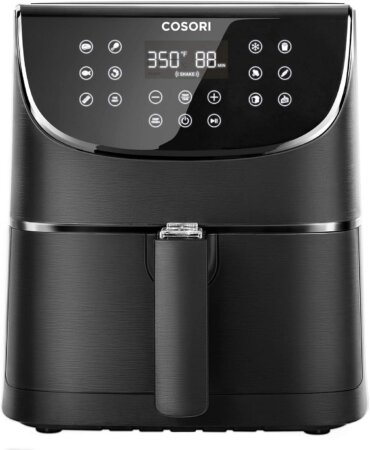 The Cosori proudly opens my review. This sleek-looking device has everything you might need and can become your indispensable kitchen helper.

Now, this is a rather large model, perfect for couples or big families. It can cook 2 to 5 portions simultaneously. But even though the Cosori requires more counter space, it doesn’t seem bulky. The brushed matte plastic exterior makes this model look stylish and sleek.

It gets even better:

The Cosori has a very sturdy construction. The removable basket is non-stick and dishwasher safe, which eliminates the need to soak and scrub. The handle is insulated and doesn’t get hot. There’s also button protection to prevent accidental removal during cooking.

Another thing that may impress you is the set of features this top-rated air fryer comes with. There are 11 pre-programmed settings for different foods and temperatures. This fryer cooks relatively fast, has a pre-heating function, and can keep your food warm before you take it out.

To sum up, it seems like the Cosori was built to impress. This model is packed with helpful features but offers user-friendly controls and comes at a rather reasonable price. To me, that’s a perfect combination!

The next item that deserves to be among the best air fryers in Canada is the Innsky. This device combines everything you might need and a little extra. For instance, the preheat function, which would come in handy if you don’t want to waste your time cooking. I personally allow the air fryer to preheat while I prepare the ingredients. This can save a lot of time, especially when doing many things simultaneously (or when having unexpected guests over).

I also love the Keep Warm function the Innsky air fryer offers. Of course, it won’t keep your food fresh for hours. But if you need to wait a bit before serving and want everything to taste great, the Innsky can help you with that. For instance, I left my food in there for around 40 minutes using the Keep Warm function. And yes, it came out delicious and warm, as if it was cooked a minute ago.

Looking for the best air fryer in Canada that could cook for your whole family and leave no one hungry? Then you might want to check this model by Kitcher. This is a 6-QT air fryer that can fit enough food for around 4-6 people. I used this fryer for a big family dinner and even had leftovers for the next day. This is also a great way to save more time when cooking. After all, the Kitcher can fit a whole chicken at once (and it comes out nice and juicy, by the way).

Another aspect that might win you over is the fact that the Kitcher cooks the food evenly despite the larger size. This air fryer properly redistributes the hot air, so the food turns out well-cooked every single time. I tested my Kitcher making large batches of fries, chicken, potatoes, and fish. I even tried baking some muffins. And every single time, the results were great (and fast, which is also important).

If you tend to be impatient like me, the Ultrean air fryer might be just the right pick for you. This little guy can deal with large amounts of food in almost no time, which makes it one of the best air fryers in Canada for when you’re in a hurry. That’s all thanks to the Ultrean’s special rapid heat circulation technology. Get this: I spent 15 minutes on fries (and they were cut pretty thick)!

Now, I also like how the screen and the controls are positioned in this air fryer. The bright LED screen is tilted. That’s why it’s super easy to use and to reach. I kept my Ultrean air fryer under my kitchen cabinets and didn’t have to move it around when cooking. I could easily access the touchscreen controls without repositioning my air fryer. And since I like my kitchen to be in order, keeping the Ultrean in one place was super helpful. 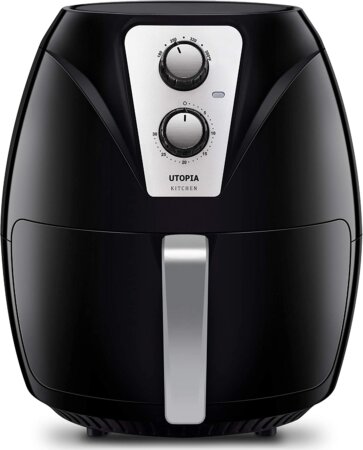 The next item I want to share in my review of the best air fryers in Canada is the Utopia Kitchen. Now, it might not make your kitchen feel completely utopian, but it sure can help you step up your cooking game and enjoy oil-free dishes.

Being able to cook enough food for 2-3 people simultaneously, the Utopia Kitchen fryer would be great for both solo users and small families. This model is not that big, so you will certainly find a perfect place for it in your kitchen.

This device is very reasonably priced. You might expect it to be a no-frills option, but it’s not. The Utopian kitchen air fryer allows for temperature adjustments and has a cooking timer. The controls may seem simplistic, but they do the job. This is a very user-friendly air fryer that does not require much effort on your part.

Overall, the Utopia Kitchen is a real steal. Being under $100, it offers decent functionality and shows great results with different foods. And don’t forget about the helpful bonus – a cooking book.

What Air Fryer Type Do You Need?

When searching for a suitable air fryer in Canada, it’s a good idea to understand the main types you can come across and how they work in general.

Now, there are two main kinds of modern air fryers you can find on the market:

Typically, using an air fryer takes more time than cooking with oil. So, in order not to be disappointed after your purchase, read carefully about the cooking time your desired fryer offers. Plus, keep in mind that different types of foods require different amounts of time to cook.

Shop Like a Pro: Factors to Consider When Searching for an Air Fryer

Now, it doesn’t matter whether it’s your first, second, or fifth air fryer. If you want to find the right air fryer in Canada, you need to remember the main factors that make this kind of device suitable for your needs:

Even if you’re frying with air, some smoke may occur. Therefore, it’s better to make sure your kitchen can be easily ventilated, before making a purchase. You could also keep your new air fryer near the range hood.

How Do Air Fryers Work?

Air fryers work like the good old convection ovens. The fan inside makes the hot air circulate around the food, which means it is exposed to heat evenly. As a result, food made using an air fryer is usually crisp on the outside and juicy on the inside.

The effect is enhanced (when compared to convection ovens) because air fryers are rather small. The food is cooked in a small chamber, so it’s easier for the hot air to surround it from all sides and cook it evenly (and faster, for that matter).

The answer would depend on what users plan to put in there. Generally, air fryers are really healthy, but they can be made unhealthy if users cook with a lot of oil.

After all, oil is what creates that beautiful crust. For some users, a spoon of olive or sesame oil is enough. And that’s the healthy scenario. For others, more oil is better, and that’s not always very healthy.

So, air fryers are as healthy as users make them. Of course, this cooking method is significantly better than deep frying. But users need to remember that the level of “healthy” would depend on what they put into their air fryer.

How Much Do Air Fryers Cost?

Here’s the good news: air fryers are available in different price segments, which means there’s a suitable option for every budget. On average, air fryers range from around $40 to $200. High-end models can go up to $300 and more, which usually means they can offer more bells and whistles.

Now, some users may also wonder how much air fryers cost to run. The thing is, it’s hard to name an exact number. The running cost would depend on many factors, including the wattage and the size of the air fryer, and the utility fees in the area. However, on average, air fryers cost around $30 a year to run if used frequently.

Can You Cook Anything in an Air Fryer?

Many users believe that they can cook pretty much anything in an air fryer. But that’s not entirely true.

Air fryers are ideal for chicken, beef, fish, and vegetables. Users can also make a healthier version of French fries in their air fryer. This cooking method is also suited for frozen foods (such as premade fries or frozen chicken). Frozen pastries can also be cooked easily and fast using an air fryer.

Now, wet batter is not ideal for air fryers. Leafy greens may not be a good idea either, as they are super lightweight and can end up spinning around by the fan instead of being cooked evenly. Air fryers aren’t great for bacon, unfortunately, as the fan can spray the fat all around the cooking chamber. This can make it difficult to clean. Soggy vegetables aren’t that great for air fryers either, as this cooking method does better with dry foods.

How lucky are we to be able to enjoy that perfect crunch without the unhealthy oils?

However, perfect results can be achieved if shoppers pick the right model to use. And to do that, users need to pay attention to the wattage (power) of the air fryers, their capacity, and the pre-set features that can make cooking much easier. It also wouldn’t hurt to read other users’ reviews to see how each air fryer performs in real life.

Now, if you’re looking for suggestions, my champion is the Cosori Air Fryer. This model has everything you might need and even a bit more. Multiple frying functions, sleek design, and simple operation will surely win you over.

So, are you ready to make a purchase? Or do you want to opt for some other model? Share your thoughts in the comments below!