Damp smell, mold, condensation on windows, and troubled breathing in certain rooms — if all these things are familiar to you, you probably have too humid air in your house.

And you’re also in the right place!

Because I’ve prepared a list of the best dehumidifiers in Canada so that you could breathe more easily and stop renovating your house every six months because of mold.

So, get cozy and take a look at my findings!

And the first unit I want to place in my list of the best dehumidifiers in Canada is the Frigidaire. This is a compressor-based dehumidifier that can remove 10 liters of water from the air per day! And this is not the only one incredible feature it possesses.

The bucket’s capacity is slightly over 4 liters, and when the bucket is full, the unit automatically shuts off. A nice bonus is that you don’t even have to discard the water from the tank thanks to the Continuous Drain feature.

Now, the unit has a programmable delay mode, so you can postpone its operation up to 24 hours. On a digital panel, you can also choose the humidity level and fan speed.

The dehumidifier comes with a washable filter that traps dust, which allows for both easy maintenance and efficient work. And it can operate even in lower temperatures, down to 41F (5°C).

With all of that said, the Frigidaire FFAD2233W1 is a great dehumidifier for large spaces with high humidity levels. It can continuously draw the moisture out and requires little maintenance.

Another Waykar dehumidifier I want to introduce to you belongs to a more powerful category. This is one of the best dehumidifiers in Canada that can operate in larger households without compromising its performance. I was testing this Waykar dehumidifier in my old basement and was surprised with the results. Only after a couple of days, that moldy, musty scent disappeared completely.

Another cool feature you might appreciate as much as I did is the automatic humidity. You can set your Waykar to the desired humidity level, and the device will keep it that way. Even when the humidity in the room changes, the Waykar can measure it and works as much as needed to achieve the desired level. I was testing this feature during a very moody week (weather-wise) when it was raining on and off. The Waykar adapted to the changing humidity levels and kept the environment in my living room stable and comfortable. 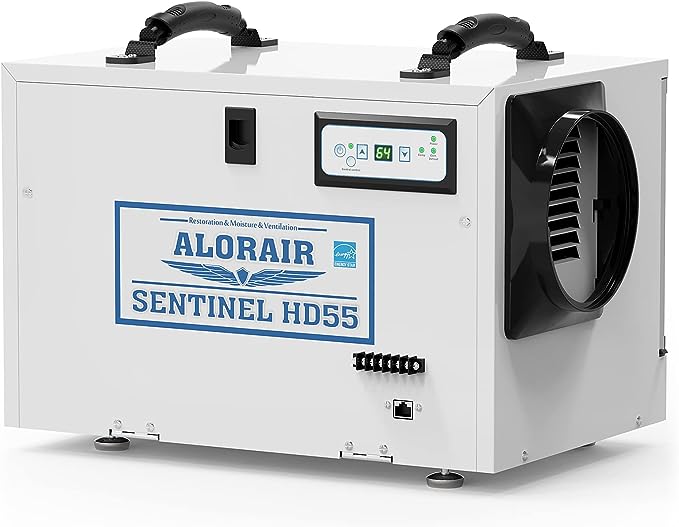 The AlorAir Dehumidifier is a small, efficient dehumidifier perfect for large rooms, crawlspaces, basements or commercial use.

Several other pros put this tool on this list. First, it is very compact and is easily accommodated almost anywhere. Second, the machine is very affordable compared to others in its category, making it a great choice for budget-minded consumers.

The AlorAir humidifier is designed to run continuously, perfect for large areas up to 1,300 sq. ft. And don't worry about those cold winter months – this dehumidifier operates flawlessly in temperatures as low as 36 degrees Fahrenheit!

It is a commercial-grade dehumidifier that can remove mould and mildew from large spaces quickly and efficiently. The dehumidifier comes with internal corrosion protection, meaning it will last longer in high-humidity environments. It also has a removable filter for quick maintenance.

Additionally, it is quiet and easy to operate, making it a great choice for any home.

So if you're looking for a reliable and durable dehumidifier, the AlorAir Basement/Crawlspace Dehumidifier is what you need.

This dehumidifier can give you the most value per price out of the whole list, and that is mainly due to two reasons: you get 30 pints a day for such a small and handy device suitable for smaller places. The next reason is that other small dehumidifiers don’t come with a 1.8 L tank and a 2 m hose to drain the water automatically like this one.

But it does not end here, This device is made to be intelligent and turn off whenever it reaches its maximum capacity, to save more energy and to let you know that it’s filled up. For a small device like this, these are already a lot of features. That is why it is perfect for average users.

The next item on our list of the best dehumidifiers in Canada is this little guy by Ivation. It is arguably the best portable dehumidifier in Canada. So, If you’re looking for something compact or want to target a specific area in your home (and don’t wish to overspend), the Ivation might be just the right pick. I used it in my kitchen after I started noticing mold growing on the tiles and the seams. Luckily enough, the Ivation managed to keep the humidity in my kitchen low. And yes, the mold did not reappear after that.

Another aspect that impressed me was the extra drainage option. This dehumidifier comes with a connection hose, so you can use continuous drainage and forget about emptying the water reservoir. This would come in handy in extra-humid spaces. Additionally, this feature can help save you some time. After all, the Ivation is rather compact. Therefore, you might have to remove the water reservoir too often if you don’t use the connection hose.

Main Dehumidifier Types: Pros and Cons of Each Type Explained

When searching for a good dehumidifier in Canada, you’ll come across three major types:

Let’s see what you can expect from each type.

Also known as refrigerant dehumidifiers, these are equipped with a compressor. As the air passes through the dehumidifier, it first goes into the filter system and then over cold coils (similar to those that can be found in fridges). The moisture present in the air condenses while passing over the coils and then drips into a tank inside the unit. Then the air is reheated to the room temperature and released back into the room.

Compressor-based dehumidifiers are the most common option you can find because of their advantages:

However, this type of dehumidifier also comes with certain limitations:

These are also known under the name Peltier dehumidifiers because their work is based on the Peltier effect.

The Peltier effect is when an electric current passes through a circuit of a thermocouple and heat is produced at one junction and absorbed at the other one.

Here’s how this phenomenon is implemented in dehumidifiers:

The electricity runs through a Peltier element (or Peltier module) in a dehumidifier, creating a temperature difference on its ends — one end of the module is cold and the other is hot.

The air is first drawn to the hot end and warmed up. Then, a fan pushes it further to the cold end of the module, thus causing dehumidification. The condensate collects on the cold side of the module and drips into the tank, and the process repeats.

Now, let’s talk about the features of such humidifiers:

Also, thermoelectric dehumidifiers may have a promising potential in situations where both lower power use and more compact design are required. Plus, they can control humidity more precisely due to adjustable input power (1).

However, Peltier units aren’t perfect, and here are some limitations they come with:

Overall, thermoelectric dehumidifiers typically are most effective in spaces of up to 25 sq.m. In larger rooms, their work may become unnoticeable, so you may want to consider other types for larger rooms and houses.

Finally, there are desiccant dehumidifiers.

And in my opinion, they’re the absolute best.

These units work through the adsorption process, meaning they use a chemical agent (desiccant) to remove the moisture from the air.

These chemicals are perfectly safe. They are similar to silica sachets you can find in your shoe boxes.

The unit features a rotating drum made of sheets soaked in the desiccant, and they absorb the water from the air. The water then condenses and drips into the tank, while the heater warms up the air and releases it back into the room.

So, what makes these dehumidifiers good?

So, what could possibly go wrong with these units, you may ask? They’re almost perfect.

Since these dehumidifiers heat the outlet air significantly, they might be not a good pick for you if your summer temperatures are high. In this case, it’s better to use a compressor-based unit that can maintain the same ambient temperature or even cool the air down a bit.

Also, desiccant dehumidifiers are generally more expensive than other types, so determine your budget first and see if you want to spend extra.

Other Things You Should Consider When Choosing a Dehumidifier

Once you have determined the dehumidifier type you want, let’s make your choice of the top-rated dehumidifier in Canada more refined by considering other essential features:

Also, you want to look for features that will make your dehumidifier easier to use, such as auto shut-off, light indicators, mobile design, washable filters, easy-to-empty bucket, programmable timer, etc.

You can ease your choice of a dehumidifier if you refer to the table provided by Natural Resources Canada (3). It will help you choose the right capacity based on your room area and the level of humidity.

What should I set my dehumidifier to in the summer?

The optimal level of humidity is between 30% and 55% throughout the year. During summer months the air is usually more humid since you don’t use heaters, so it’s better to keep the humidity level at 35-40%.

What should I set my dehumidifier to in the winter?

How quickly should a dehumidifier fill up?

A typical refrigerant dehumidifier should remove between 30% and 40% of their capacity rating for 55% relative humidity at around 20°C, and these numbers will vary depending on the tank capacity and climate in your home region. Note that the device will always fill up more quickly during the first run.

How to dispose of an old dehumidifier?

The best way to dispose of your old dehumidifier is to contact your local department of sanitation office or household hazardous waste facility and schedule an appointment for your device to be picked up and removed.

The microclimate in the house is important not only for your renovation works but also for your health. And a dehumidifier can help you achieve the right humidity and improve air quality so that you could breathe more easily.

All the models presented to you above work for different occasions, so be sure to check them thoroughly before making your final choice.

As for me, I’d go with the Frigidaire FFAD2233W1 dehumidifier. The things I liked the most are its capacity and the drain system that excludes your participation in discarding the water and allows you to run the unit continuously.

And what about you? Which model among these could be your go-to choice and why? Share your thoughts below!